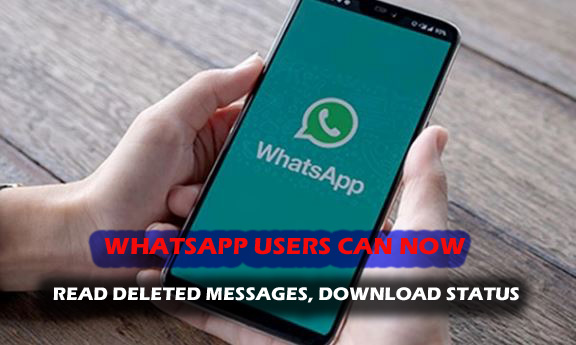 Read Whatsapp deleted messages and download status. A useful Android app called WAMR will enable WhatsApp users to recover messages. Making it possible for the receiver to read the deleted messages from the sender besides downloading the messaging app’s status.

The messaging app has introduced a feature to its users to delete their sent messages from the sender’s device that is not more than 60 minutes longs.

Can someone see my WhatsApp messages from another phone?

How to prevent your WhatsApp account from being stolen

WAMR will recover the deleted messages without trying to log in to your WhatsApp after getting access to the notifications and captured each incoming notification, even the deleted ones to save it in its own cache data.

The app has a feature to store deleted media files including photos, however, it will require automatic media down to be turned on the device.

It is important to remember that the app only captures the incoming notifications on the mobile device and it will not be able to capture the messages without being notified including individual or group chats that have been muted by a WhatsApp user nor it will retrieve any deleted message before its installation.

A useful Android app called WAMR will enable WhatsApp users to recover messages, making it possible for the receiver to read the deleted messages from the sender besides downloading the messaging app’s status.

What is WAMR and how can you use it?

WAMR app is a mobile utility tool that helps you to retrieve the messages that were deleted by the sender before you could read them. It can also retrieve media attachments such as pictures, videos, audio, voice notes, animated gifs, and stickers. With the help of WAMR app, you can also download status updates from WhatsApp.

Here’s how you can use WAMR app:

After you install the WAMR app from the Google Play store. Choose the apps such as WhatsApp, Instagram, and Telegram so that the tool can capture the notifications as per your choice. You will have to give numerous permissions to the app for capturing the notifications.

The app has no direct access to the messages on your smartphones due to end-to-end encryption and as soon as it detects a deleted message. You will get a notification. If your auto-download option for media files is turned on, the app will restore all those deleted media files too. Once the WAMR starts capturing, the deleted messages will appear in the app’s interface, similar to WhatsApp’s main screen.

How to block someone on Facebook without them knowing